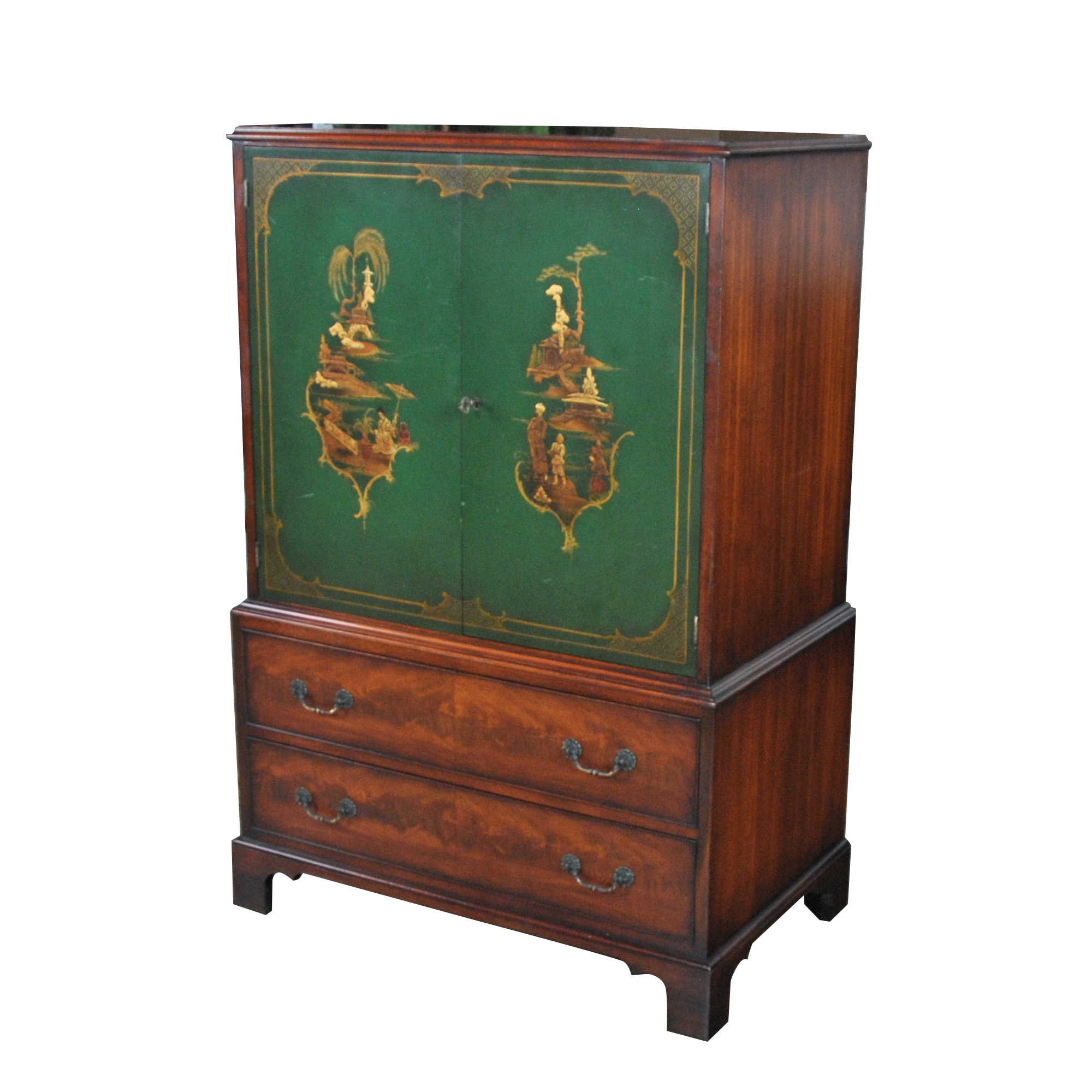 Item Sold and no Longer Available

The absolute highest quality piece of American cabinet making is exemplified in this VINTAGE  Gentleman’s Chest which was retailed by W and J Sloane and created by “The Company of Master Craftsmen”. From the hand painted and raise painted doors all the way down to the figured veneers used on the drawer fronts in the base this cabinet exemplifies the finest of American craftsmanship. The Company of Master Craftsmen created beautiful examples of the finest furniture for America’s premier retailer W and J Sloane who were well known for having furnished spaces such as the White House in Washington, DC as well as influencing the style on New York’s elite clients for many decades.  All of the drawers have solid brass handles and are dovetailed for strength and support, as are the pullout trays in the upper portion of the cabinet. The top section can be closed and the doors will hide away all of your most valued garments. The sides and top of the W and J Sloane Gentleman’s Chest is also decorated using high quality figured mahogany as well as solid mahogany moldings. With the exception of a sympathetic restoration to the very top of the pieces everything on this cabinet is in original, as found, condition including the original key. Item includes original stamp in the back detailing the manufacturing number as well as the design logo for “The Company of Master Craftsmen”. This chest is fresh to the market, having been purchased directly from W and J Sloane and remaining in one family until being offered here. If you were to custom order a cabinet of the same quality today we can only speculate that the price would be in excess of $10,000.

The listed price of this item includes free curbside shipping for most addresses in the continental USA. Should you require more information regarding our free shipping program or if you prefer to have your items delivered via white glove service for an additional charge please call 717 769 7906. If you can pick the piece up yourself  at our warehouse in PA (with prior appointment) we can also offer a discount.

As with all antique and used pieces of furniture there will be some small signs of wear and tear but overall this item is in excellent original condition.

More about W and J Sloane from Wikipedia:

On March 2, 1843, the company was founded as a rug importer and seller by William Sloane, who had just emigrated from Kilmarnock, Scotland, a town famous for expensive furniture, fine carpets and rugs.[3] Its teak and jute resources came from East Bengal (present day Bangladesh).[4] In 1852, his younger brother John W. Sloane joined the firm, upon which it was renamed W. & J. Sloane, followed by William’s son William Douglas Sloane. It was the first company to import oriental carpets into the United States. It soon expanded to include furniture and other home furnishings, and quickly became the choice of the elite in New York.[5]

In the late 19th century, the company added an antiques department, started producing furniture, and became the first home furnishings store in the country, billing itself as “W. & J. Sloane Interior Decorators and Home Furnishers.” Its flagship store was originally located at Broadway and 19th Street, in “Ladies’ Mile“, relocating later to 414 Fifth Avenue at 38th Street, the former flagship of Franklin Simon & Co.[6]

In 1891, W. & J. Sloane incorporated and set the national decorating taste of the United States, and over the next sixty years decorated the homes of the most prominent people in the country, including the Breakers and the White House, created Hollywood movie sets, and even designed and decorated interiors of automobiles. It opened a branch in San Francisco, California originally to furnish pavilions at the 1915 Panama-Pacific Exposition (it also furnished the model homes at the 1939 New York World’s Fair).[7] It later acquired other upscale firms such as the California Furniture Company, and in 1925 a subsidiary, the Company of Master Craftsmen was founded by William Sloane Coffin Sr. (the father of Rev. William Sloane Coffin) to create colonial revival furniture.[8] During World War II the company worked with the Newport News Company and the North Carolina Shipbuilding Company on shipbuilding contracts for the United States Navy fitting out the interiors of liberty ships under the direction of John Sloane Griswold.[4]